Writing this up a little late, but at the beginning of February I got to attend MQ’s Mental Health Science conference. It was a two-day conference with a huge range of speakers talking about all sorts of research related to mental health, and was my first conference!

This is a little run-down of the talks I went to and things that I found interesting to think about going forwards.

Loneliness Talks in this section were by Professor Pamela Qualter, Uni of Manchester and Dr Tim Matthews, KCL. There was some really interesting stuff about loneliness peaking in teen years through to early adulthood, then again in older age. Loneliness was defined as a perceived discrepancy between the relationships you want to have and the relationships you actually have, so is very subjective but influenced by societal norms. It also peaks at 30ish but not as much, possibly because young families often feel isolated?

The research presented explained loneliness to be a feeling similar to hunger in humans, in that it serves a purpose to make you want to connect with people. It leads to mental health problems when you feel it for an extended period of time. Humans are conditioned to feel loneliness because it is a useful evolutionary tool, and kept us safe by wanting to be in a pack. When we are not in a pack we feel lonely and our brain has heightened awareness of our own safety in case of predators etc, however this also makes it harder to sleep, and means when you are with other people you are more likely to think that people are being unkind to you because your brain is on high alert for threats. This can partly explain why some people find it hard to reintegrate socially after being isolated for a while.

Someone from Public Health England (Jude Stansfield) also did a talk about mental wellbeing and linked to the Foresight Report (which I had never seen before!) which has loads of interesting info and research summaries about mental health issues - theres a section about Looked After Children too, which is great as they often seem to be missed out as a key group in mental health research.

I especially loved this image from the report, as for me it fitted in so well with systemic social work practice and how we need to conceptualise mental health in context. 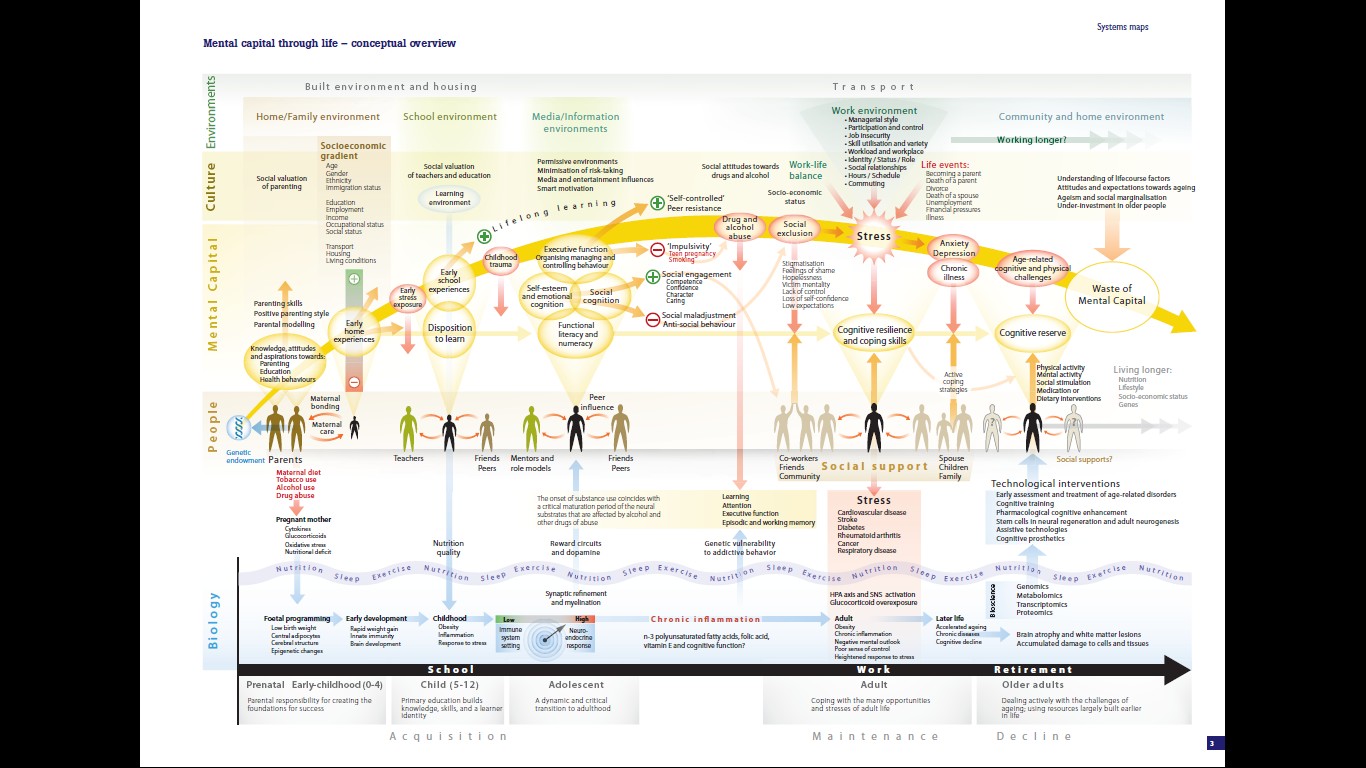 ADHD Some research presented by Dr Jessica Anew-Blais has found that some people might be exhibiting adult-onset ADHD. ADHD will clasically appear in childhood, and will either carry on into adulthood (1 in 5 people) or it will disappear by the end of childhood, but it appears there is also ADHD which appears in late-teens or early 20s. There is ongoing research into this, but it looks like your genes play a big role in what type of ADHD you may get.

Social work key note speech on resilience by Dr Michael Ungar Michael Ungar is a Social Worker from the US, and family therapist. He researches resilience in young people and why some people are more resilient than others. He talked about how resilience needs to be viewed through a systemic lens, by seeing a person within their environment and community. Resilience is not a personal characteristic, it’s a product of your environment and the resources available to you. When we talk about young people being resilient or not we need to also think about what in their environment has led to this, and how we can nurture it.

His talk was also about how gatekeepers (e.g. social workers, teachers, health etc) are responsible for providing the tools to children to benefit their resilience, not just families. It is the purpose of gatekeepers to recognise what resources are available to build resilience!

Interestingly, children who grew up in low-risk home environments had worse resilience after receiving an intervention around resilience so it’s not a one-size-fits all thing!

There’s a booklet called ‘What Works’ that he and his team have created. It is about designing resilience building youth programs, but would be helpful for designing interventions too I think.

Neglect and the gut Dr Bridget Callaghan, Colombia University, presented her research into gut bacteria in severely neglected children. She has found that children who are neglected develop different gut bacteria to children who are not neglected. This has implications for their gut health when they grow up and neglected children often present with gut problems, e.g. IBS, when they grow up for this reason. Gut problems are thought to also be closely related to brain chemicals, and an association has been found between gut health and mental health.

Mental Health and Obesity Dr Claire Llewellyn, UCL, did a great talk about how obesity levels have risen directly with increased availability of cheap, unhealthy, sugary foods. Obesity is not a result of an individuals decision making, but there is a huge stigma which implies that fat people have made poor choices. Her research has found that 45% employers are less likely to employ someone with obesity, and that majority of obese people have been discriminated against by healthcare professionals.

Health interventions (diets) for obesity are only successful for a very small minority of people (something like 1 in 1200).

Research is showing that this is because your genetics are responsible for your eating habits, like how easily you can turn down food or how well you are able to tell when you are full. Recommendations are that governmental level change is needed as with sodium in foods, and smoking to produce changes.

Suicide and Self-Harm There were a series of presentations on this topic by Dr Becky Mars, Bristol Uni, Dr Rory O’Connor, Uni of Glasgow and Prof Ellen Townsend, Notts Uni. We were presentated with different models of suicide, and ideas that the risk factors that make someone likely to think about suicide are not the same as the risk factors for those who actually go on to attempt suicide (more on this here). This is contrary to previous models which thought people who actually attempted suicide had more of the same risk factors as those who thought about it. E.g. Depression is not actually a big risk factor for attempting suicide if you already have suicidal thoughts, but we used to think that having a diagnosis of depression meant you were more likely to move from thinking to doing. It is still a factor, but not as important as feeling like you are a burden to your loved ones.

Lastly there was some very cool research with young people who self harm. They created cards with lots of statements of feelings (e.g. I hated myself, I felt like I couldn’t trust anyone), and asked them to sort them into sections to show how they felt 6 months before, a week before, a day before, just before, during, just after and further after self-harming. They did this to find out more about why young people self-harm but the participants also found it therapeutic and informative about their own thought patterns behind their self-harming behaviour. Thought this could be a creative idea for direct working with anyone who self-harms, if appropriate. They also went on to do this same activity specifically for Looked After Children.

In conclusion… This was such a brilliant conference, and a great introduction to the current field of mental health science, which is pretty important because at the moment I’m trying to work where I stand in it.

I’m also quite pleased that I managed to meet some new people while I was there and make some connections with other people in data science related fields - hooray!

Thanks MQ for such a great event!

Paper-a-day bot with no code required

This year I wanted to have a go at a paper-a-day challenge; reading one paper every (working) day. Over the last year I have been building up a list of papers ‘to-read’ but never getting around to them, and generally not making reading much of a priority when other things have been busy. Trying to read a paper a day seems (probably naively) like a good way to quickly get through some of my outstanding reading lists, and prepare for doing a lot more thesis writing over the next year or so.

Setting up GitHub Actions for a Django project

I’ve been hoping to use my current work on the Mood Music project to test out GitHub Actions for continuous integration (CI). There are a few extra steps needed for the Django set up because of databases etc so this is a little guide to save my future self the pain of figuring it all out again.

You can read an update about the Mood Music study on inferring wellbeing from Spotify here, on a guest blog post I wrote for the Jean Golding Institute.

After spending 3 months on a Python project (see the COVID-19 community map here!) I’ve gone back to an R project that I started in 2019. After getting used to using Python there have been a few functions that I’ve really missed in R, so I’ve collected a few substitutes that I’ve found.